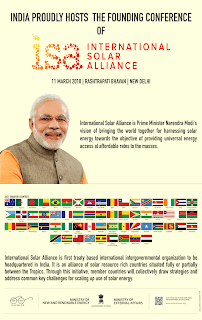 India found its rightful place under the sun as Prime Minister Narendra Modi’s brainchild, the International Solar Alliance, formally kicked off with 62 member-countries adopting the ‘Delhi Solar Agenda’. The pact seeks to raise the share of solar power in their energy basket with a view to mitigate climate change and provide clean, affordable electricity to the underprivileged.

Modi and French President Emmanuel Macron co-chaired the ISA founding conference in the presence of heads of state of 23 countries and ministerial representatives from 10 other nations, indicating an acceptance of India’s leadership role in the global fight against climate change.

It is no wonder then that ISA will be headquartered in Gurgaon in Delhi’s suburbs, the first time that an international treaty body will have its secretariat in India.

The choice of Delhi as the venue for holding the ISA founding conference reinforces India’s pole position built on the government’s plan to create 175 gw (gigawatt) renewable energy capacity by 2022, the world’s single-largest renewable energy programme.

The idea of forming an alliance of countries between the tropics—which enjoy an abundance of sunshine that can be harnessed for producing clean and affordable power—was mooted by Modi in 2015, months before the Paris climate summit in November.

Initially, the grouping was proposed to be called the International Agency for Solar Policy & Application. The idea was to create a common market for green energy through shared values, experiences and resources. Subsequently, France joined as co-promoter, with then French President Francois Hollande joining Modi to launch the grouping under the ISA tag at the Paris climate summit.

Some 32 countries have ratified the ISA framework agreement, while 30 others have joined the grouping. The adoption of the Delhi Solar Agenda underpins the grouping’s target of raising $1 trillion investments for creating 1,000 gw, or 1 terrawatt, of solar power capacity by 2030. Little wonder then that funding and political push for clean energy were the common refrains in both Modi and Macron’s speeches on Sunday.

Underlining the importance of concessional financing and less-risky funding for solar projects, Modi presented a 10-point plan, including making affordable solar technology available to all nations “We know the hurdles... (there) are financial hurdles, regulations, capacity hurdles as well. We shall therefore lift every single one of them. To that effect, it is not enough to look at what governments are doing. We need a new international deal with the private sector, the international public sector and the civil society as well ” he said.