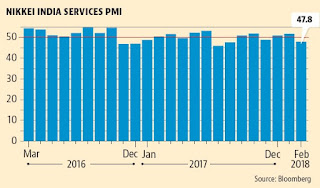 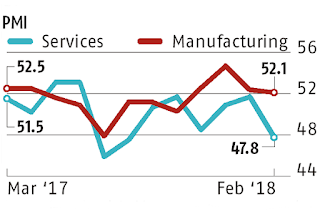 Services, the dominating sector of the economy, contracted to a six-month low in February, as new work orders suffered amid weak demand, showed the widely tracked Nikkei Purchasing Managers Index survey. This is the fourth contraction this financial year (2017-18).

But, firms continued to hire, seemingly considering the contraction to be an aberration.
The PMI for services fell from 51.7 in January to 47.8 in February, lowest since August. The index slipped below the 50-point mark, which separates expansion from contraction. It stood at 48.5 in November last year. PMI had fallen to 47.5 and 45.9 in August and July, 2017, because of adjustments after the goods and services tax (GST) roll-out.

Now, the question is would the decline in PMI affect GDP growth in the fourth quarter (January-March) for 2017-18. There is no direct relationship between the two.

Experts are of the opinion that poor underlying demand affected activity.

However, firms seemed confident of output growth over the next 12 months. Job growth quickened to June 2011 levels.

The seasonally adjusted Nikkei India Composite PMI Output Index, which maps both the manufacturing as well as services industry, fell from 52.5 in January to 49.7 in February.
On the price front, input cost inflation accelerated to the strongest since November, while charges were raised to the greatest extent since July. An imminent risk to firms’ margins are higher fuel prices, which materialised into the fastest input cost inflation in the overall economy (manufacturing and services) since July 2014.