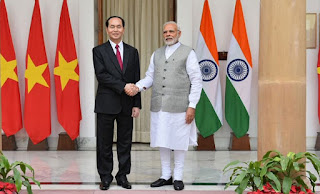 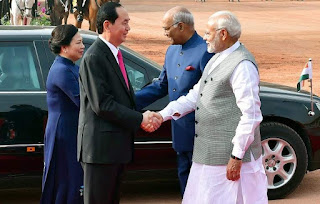 India and Vietnam agreed to cooperate on nuclear energy, trade and agriculture as Prime Minister Narendra Modi held talks with the President of Vietnam, Tran Dai Quang. Vietnam is one of India’s closest strategic partners in the Asean region.

The two sides decided to explore co-development projects in defence sector and boost ties in oil and gas exploration, including with third countries. “We will jointly work for an open, independent and prosperous Indo-Pacific region where sovereignty and international laws are respected and where differences are resolved through talks,” Modi said in remarks to the media.

In response, the Vietnam President said it supports India’s multi-faceted connectivity with Asean, adding there should be freedom of navigation and over flights in the region. While India, the US and several other world powers have been pressing for resolution of the dispute on the basis of international law under UNCLOS, China has favoured a bilateral framework with different countries. Modi said India and Vietnam will also look for a trilateral partnership in the oil and gas sector. India already has two blocks for oil exploration in the South China Sea, despite criticism from China.

China has been opposing India’s Oil and Natural Gas Corporation exploration activities in areas claimed by Vietnam in the SCS. India has been asserting that the ONGC’s exploration is a commercial operation and not connected with the dispute. Vietnamese President said, “We highly value projects, including the cooperation in joint oil and gas exploration in the continental shelf of Vietnam.”

Quang said it was important to respect the diplomatic and legal process in resolution of maritime dispute.

The visit of the Vietnamese President is the second high-level visit from that country in little more than a month.