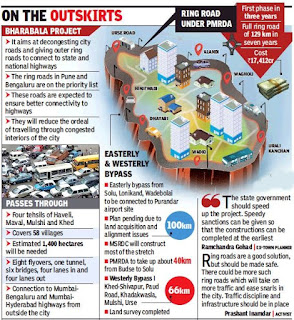 It will take more than three years to construct the first phase of the ring road planned along the outskirts of the city.

The project by Pune Metropolitan Region Development Authority under the Bharamala project will connect roads in the city to state highways on the outskirts.

Once ready, it is expected to decongest the traffic on the internal roads in Pune and Pimpri Chinchwad, a major cause for the rising number of accidents, since most heavy vehicles will use it. The ring road link would improve the traffic flow on internal roads as well, experts said.

The first phase of the 129 km ring road will take at least three years to complete and nearly seven years for the entire stretch to be open to the public.

It recently got a central budgetary allocation of Rs.2,468 crore. The state government has agreed to part with Rs.812 crore worth land.

Work on the first stretch between Satara and Ahmednagar Road of 32 km will get underway with the central budgetary allocation. Heavy vehicles and passenger traffic moving in the city to access these highways will use the ring road.

Moreover, the proposed easterly and westerly bypasses to be implemented by Maharashtra State Road Development Corporation will provide succour to commuters who have to travel through the city to reach highways. Land acquisition for both projects is going on.

MSRDC officials said the projects will take at least three years. “From land acquisition to alignment, there are technical issues and unless they are addressed it will delay the process,’’ the officials added.

Former town planner Ramchandra Gohad said decongestion of the city’s roads is a priority and work must be speeded up so that congestion can be reduced immediately.

Heavy vehicles blatantly use the internal roads in the city.