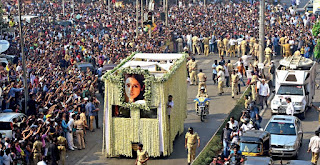 Sridevi’s mortal remains arrived late night on Tuesday in Mumbai, after receiving the necessary clearances from authorities in Dubai. The media, fans, members of the Kapoor family and their friends and well-wishers were prepared for the arrival at the airport. An ambulance took her body from the cargo terminal to her residence in Lokhandwala.

Sridevi’s residence and the society where she lived, were decorated in white. Additional forces and private security were deployed throughout the night to ensure that the condolence meeting scheduled in the morning would take place without any problems. Sridevi’s mortal remains were taken to the Celebration Sports Club on Wednesday morning. Her body was placed in a glass casket where her family, friends and fans could see her. The Padma Shri awardee was drapped in the tricolour and given state honours.

Sridevi’s body was draped in a red kanjeevaram sari with a gold border, and she was adorned with a chunky gold necklace. The hall was decked with flowers and the air was filled with the fragrance of mogra. Arjun Kapoor stood outside the venue to greet visitors. Karan Johar was one of the first ones to arrive. Family members Sanjay Kapoor, Rhea, Sonam and Harshvardhan arrived early at the venue too. Rani Mukerji and Sonam were sitting beside Sridevi’s body. Good friend Vaibhavi Merchant was seen attending to the visitors inside the hall.

Sridevi was a favourite among filmmakers, too, and everyone from Ramesh Sippy to Sanjay Leela Bhansali, Shekhar Kapur, Imtiaz Ali, Rakeysh Omprakash Mehra, Ashutosh Gowariker, Sajid Khan and Madhur Bhandarkar were there to bid adieu to the superstar.

The condolence meeting concluded at 12.30 pm and the Kapoor family then moved on to the Vile Parle Seva Samaj Crematorium and Hindu Cemetery to perform her last rites. Prominent names like Amitabh Bachchan, Shah Rukh Khan, Javed Akhtar, Shabana Azmi, Anupam Kher, Arjun Rampal, Randhir Kapoor, Rajiv Kapoor and Anil Ambani were spotted at the cremation ceremony. To control the crowd, the traffic police made changes in the route. Traffic was diverted from various junctions to allow the smooth passage of the van.

When the time came to take Sridevi's mortal remains to the crematorium, the crowd of fans became unmanageable, as they tried to catch a final glimpse of India’s first female superstar.