The Lotus blooms in the North-East 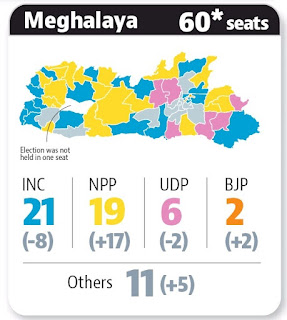 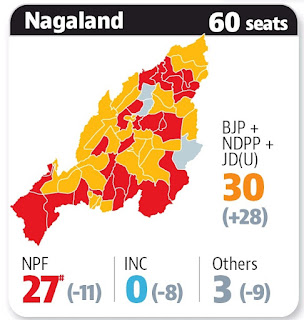 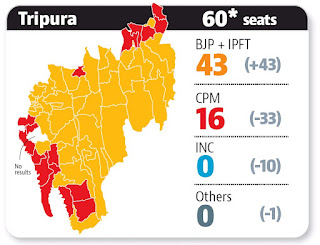 The saffron shellacking – the stuff of fantasy for the Sangh Parivar – ended CPM’s 25-year grip over Tripura and pushed the Marxists into what could arguably be their worst crisis since they split in 1964. Combined with its success in retaining Nagaland as part of a coalition and the strong possibility of it snatching Meghalaya from Congress in company with regional parties, the results from the north-east removed all doubts that BJP has supplanted Congress as the party with real all-India influence.

CPM has been badly hurt by the loss of yet another “red enclave” after it ceded West Bengal to Mamata Banerjee, but Congress has suffered serious damage too. An improved showing in Gujarat and gains in the recent Rajasthan byelections had encouraged Congress to create an impression that it was on the road to recovery from its 2014 rout. The results of Saturday—yet another testament to the appeal of PM Narendra Modi and his promise of development as well as the success of BJP chief Amit Shah in encashing it—have put a spoke in Congress wheel.

Congress has lost office in north-eastern states earlier too. In 1998, the party, with BJP in office at the Centre, had shrunk to just one of the “sisters”. What makes the situation starkly different this time is the presence of an ambitious BJP which earlier won Assam, the biggest prize in the region, and the rapid depletion of Congress’s strength. It has drawn a blank in both Nagaland and Tripura with abysmally low vote shares. In Meghalaya, BJP has made a serious bid to manage the numbers to thwart Congress, which is the single largest party, but 10 short of majority.

A saffron success in Shillong would mean a reduction in Congress-controlled states to just four nationally.