Maharashtra’s growth rate to drop to 7.3% 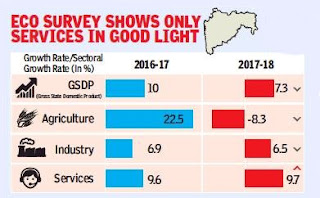 Maharashtra’s economy is set to grow at a slower rate. From 10% in 2016-17, it is estimated to fall to 7.3% in 2017-18 as per the state’s economic survey. While insufficient monsoon rain has significantly pulled down agricultural growth, industrial growth, including manufacturing, too, is set for a decline, the survey shows.

Nevertheless, the state’s growth rate is slated to be higher than the country’s 6.5%. Maharashtra’s per capita income too is among the highest in the country and is set to grow from Rs.1.65 lakh to Rs.1.8 lakh per annum. Also, according to the national economic survey, Maharashtra has the highest share of GST collections and the country’s exports.

“The decline in the state’s growth rate is mainly because of the lower monsoon last year, which was 84.3% of normal compared to 95% the previous year. We should also remember that the state’s economy is still growing faster than the national economy,” said state finance minister Sudhir Mungantiwar, dismissing concerns about the lingering impact of demonetisation and GST on the economy.