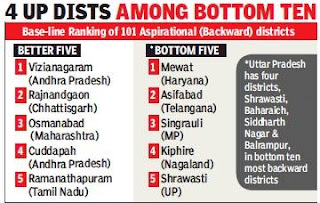 Mewat, Gurgaon’s immediate neighbour in Haryana and just a couple of hours’ drive from Delhi, is India’s most backward district, finishing bottom of a Niti Aayog ranking.

The Aayog released the baseline ranking based on 49 indicators across five sectors that included health and nutrition, education, agriculture and water resources, financial inclusion and skill development, and basic infrastructure.

A few more — around 10 from Odisha, four from West Bengal and one from Kerala — will be added to the list, taking the total to 116. The 35 worst Maoist-affected districts are included in the list. As part of its “naming and shaming” strategy, the government think tank will come out with a delta ranking of these districts every month from May 2018 based on their “incremental progress” to be monitored on a real-time basis. The dashboard developed for real time data collection and monitoring will be open for public from April 1 and will help monitor the progress of these districts.

Niti Aayog CEO Amitabh Kant said, “People will know which districts are performing well and which are lagging behind.”

With an eye on the 2019 Lok Sabha polls, Prime Minister Narendra Modi had launched the ‘Transformation of Aspirational Districts’ programme in January to transform some of the most underdeveloped districts of the country.