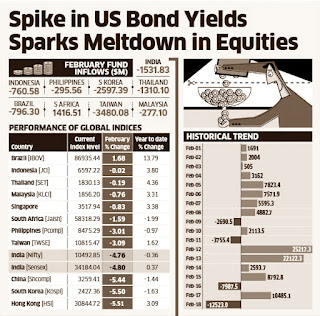 Foreign investors pulled ₹12,500 crore out of Indian equity markets in February as the rout in global equities triggered by surge in US bond yields and sky-high valuations back home took a toll on sentiment. The sell-off marked the worst ever February in terms of outflows by foreign investors.

India is also among the markets which have seen the worst of the outflows within the emerging markets space this month. In dollar terms, India saw outflows to the tune of about $1.5 billion from foreign portfolio investors in February (till Tuesday), the third highest after Taiwan ($3.5 billion) and South Korea ($2.6 billion), Bloomberg data showed. FPI flows data for China and Singapore were not available.

The global rout also resulted in India becoming one of the worst performers among major emerging markets. Benchmarks Sensex and Nifty fell 4.8% each in February, the fourth highest after Hong Kong’s Hang Seng index, South Korea’s Kospi index and China’s Shanghai Composite index which fell 5.4-5.5% in February. But for the domestic institutional purchases to the tune of ₹17,800 crore in February, the fall in the market would have been much sharper India’s own issue of banking fraud at Punjab National Bank, introduction of long-term capital gains tax on equity in the Union Budget on February 1 also weighed on sentiment.