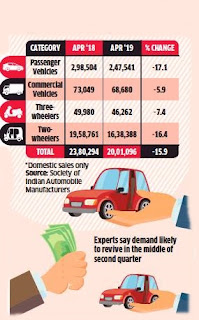 Automobile sales in the country fell across categories last month as consumers deferred purchases ahead of the general election results.

SIAM data shows retail sales of passenger vehicles declined 1.28% to 264,035 units in April and those of commercial vehicles slid 11% to 78,175 units. Retail demand for two-wheelers dropped 7% to 1.3 million units in April.

Several adverse factors – from high insurance costs, tight liquidity to uncertainty in the minds of buyers – had come together to drag down sales numbers.

Sluggish consumption in rural and urban centres affected two-wheeler sales, which fell 16.4% to 1.64 million units. While demand for scooters dropped 26% to 489,852 units, that for motorcycles went down by 11.8% to 1.08 million units.

Industry experts said demand is expected to revive in the middle of the second quarter, after the next government takes over. Counting of votes cast in the general elections is on May 23.

Overall, sales of vehicles across categories declined 15.9% to just over 2 million units in April.