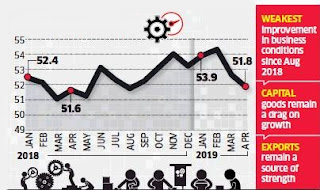 India’s manufacturing activity grew at its slowest pace in eight months in April owing to a sluggish increase in new orders.

New business growth moderated at the start of 2019-20, curbed by the ongoing general election and a challenging economic environment.

The Nikkei India Manufacturing Purchasing Managers’ Index declined to 51.8 in April from 52.6 in March but remained above the 50-point mark that separates expansion from contraction.

Among sectors, capital goods was the key source of weakness as it recorded contractions in new business and output while both consumer and intermediate goods makers continued to grow.

The one bright spot in April was exports, which expanded solidly and at a slightly quicker pace than in March. The overall slowdown in the sector was accompanied by cooling rates of inflation, the report said.

The RBI, which had last month cut interest rates 0.25%, has pegged retail inflation at 2.9-3% during April-September because of lower food and fuel prices and expectation of a normal monsoon. The meteorological department has predicted a near-normal monsoon, with expected rainfall at 96% of long period average.

The PMI is based on a survey conducted among purchasing executives in more than 400 companies, which are divided into eight broad categories — basic metals, chemicals & plastics, electrical & optical, food & drink, mechanical engineering, textiles & clothing, timber & paper and transport.