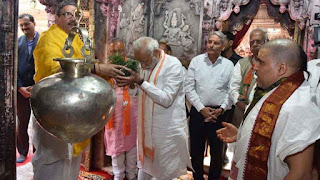 Prime Minister designate Narendra Modi, on a thanksgiving mission to Kashi after his overwhelming poll victory, invoked Bharat Mata and ridiculed the habit of littering the country, including spitting of “Banarasi paan juice”.

This is not the first time Modi has criticised the red splotches seen everywhere — from ghats and roads to walls and stairs. After winning the 2014 Lok Sabha elections, he had made a similar appeal to his supporters.

The PM-designate also had a word of advice for those who vandalised public property. “Keep in mind that public property — be it a government school or a hospital — belongs to you. You must work together for their upkeep,” he said.

Earlier in his speech, Modi thanked his party workers for their support and also praised rival candidates for their endeavour. “The LS polls were contested in a very cordial atmosphere in Kashi. The credit goes to all rival candidates, including independents,” he said. In the same breath, he praised Yogi for proper implementation of the “sankalp patra (manifesto) of the party” to make the job easy for party workers.

The people here, particularly women, took responsibility of the campaign, Modi said. “They turned it into a carnival so that I could contest with confidence,” he said, referring to a widely discussed scooter rally taken out by girls. He added that he could visit Kedarnath (on May 18-19) because people took charge of his victory in Varanasi.

The PM-designate also paid his respects to folk singer Padam Shri Hiralal Yadav who passed away a fortnight ago.