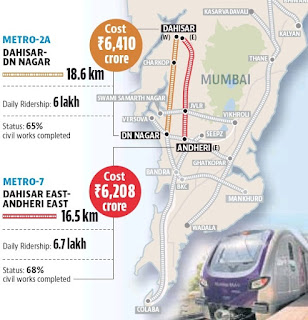 With an eye on Assembly elections, chief minister Devendra Fadnavis on Monday chaired a review meeting of all mega infrastructure projects in the state and said Metro-2A and Metro-7 lines will be operational by early 2020.

Metro-2A, from Dahisar to DN Nagar Metro, and Metro-7, from Dahisar East to Andheri East, are expected to cater to around 16 lakh passengers daily. The state had been planning to complete the Metro-2A and Metro-7 corridors before going to the Assembly polls by October 2019. However, owing to delay in procuring rakes, the deadline has been pushed.

At the CMO war room, Fadnavis reviewed the overall progress of Metro works in Mumbai, Nagpur and Pune; the Navi Mumbai Airport; the irrigation projects; sea link project; the Mumbai Trans Harbour Link; and railway projects in the state.

The Assembly elections are scheduled to be held in September-October this year. After coming to power on the development plank, the Bharatiya Janata Party-led state government has focused on developing mass transport facilities in Mumbai, Pune and Nagpur. The CM also directed officials to complete construction of the additional six Metro lines in Mumbai and Mumbai Metropolitan Region  by 2022. “By 2022, we plan to have a Metro network of 119 km by completion of Metro lines DN Nagar-Mankhurd (Metro-2B), Colaba-Bandra-Seepz (Metro -3), Wadala-Ghatkopar-Thane-Kasarvadavali (Metro-4), Wadala-GPO (Metro-4B), Thane-Bhiwandi-Kalyan (Metro-6) and Lokhandwala-Vikhroli (Metro-5),” the official said, adding that by 2022, work on 169 km of additional Metro lines across the state will start. Officials said the work on MTHL will be completed by 2022-end.

The CM also took stock of the key irrigation projects in Vidarbha like the Gosikhurd National Irrigation Project, which the government has been pushing for. With a potential to cater to 2.51 lakh hectares annually, the project is being undertaken for Bhandara, Chandrapur and Nagpur regions. Vidarbha officials told the CM that the project, being undertaken at a cost of ₹19,000 crore, will be completed by 2020-end. “When the Fadnavis government took over, irrigation capacity of project was just 30,000 ha; it is now 1.80 lakh ha. Financial misappropriation case in the project caused delays,” said an official from the water resources department. Bembla and Lower Wardha irrigation projects were also discussed in the meeting. 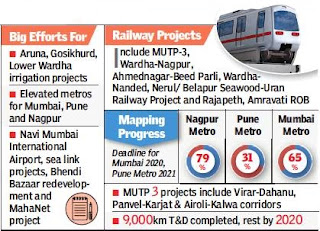 Chief minister Devendra Fadnavis also reviewed the Metro work for all the three lines in Pune. He told the Maha-Metro authorities to speed up land acquisition and other issues ahead of the state assembly election four months away.

The meeting was conducted after the model code of conduct was lifted.

The three lines in Pune include the elevated 23 km line from Hinjewadi to Shivajinagar and the MahaMetro’s 31 km lines from Vanaz to Ramwadi and from PCMC to Swargate.

MahaMetro officials were told to stick to the December 2021 deadline target and expedite the right of way and land issues at the earliest.

Fadnavis also took stock of all the big projects in the state and set time lines before the next model code of conduct begins. He said all the proposed Metro lines in Pune, Mumbai and Nagpur will be operational by 2021 and 2022 and “additional metro lines of 169 km will in operation” in the state. It will take the total network of metro lines up to 323 km, Fadnavis tweeted after the war room meeting.

It was conducted to assess various works of irrigation, road, railways, metro and other infrastructure projects in the state with all the departments’ secretaries, divisional commissioners and collectors through video conferencing.

There are defence land issues related to the Metro in Khadki. The tangles were to be sorted out by the Pune Municipal Corporation and the defence officials at the earliest. The contentious 2 km stretch of land in the defence area which needs to be acquired needs to be resolved.

They are also working on completing the 12 km track by December 2019 as was assured by Prime Minister Narendra Modi during his visit to Pune last year.

With the Pune Metropolitan Region Development Authority metro line extending from Hinjewadi to Shivajinagar, the right of way was discussed in the case of private and government land.

Instructions were issued by the CM to expedite them, PMRDA commissioner Vikram Kumar said after the meeting. He said work of shifting utilities such as cables along the path would be begin.