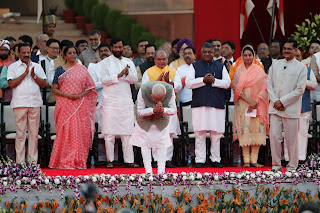 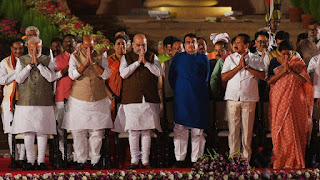 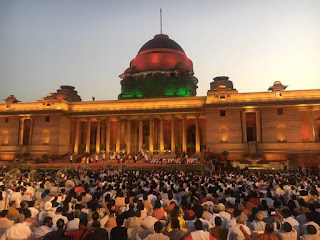 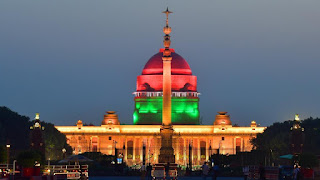 The historic forecourt of Rashtrapati Bhavan, overlooked by the imposing dome of the President’s residence that was lit up in the colours of the national flag for the occasion, hosted an audience of around 6,000-7000 people including politicians, businessmen and movie personalities for the swearing-in ceremony of Narendra Modi’s second government.

As the sun went behind the dome, the full frame of the council of ministers of the new government came to light, putting week-long speculation to rest. In all, 58 ministers were administered their oaths of office by President Ram Nath Kovind, who gently ticked off one or two for skipping key words and helpfully prompted a few others.

The around 110-minute-long programme was gustily cheered on by Modi and Bharatiya Janata Party supporters with chants of “Bharat Mata Ki Jai” (which the Telangana MP, G Kishan Reddy, managed to incorporate into his oath), “Har Har Mahadev” and “Modi, Modi.” When the audience fell silent, the Presidential estate’s roosting mynahs and lapwings provided the background score on a warm day which turned into an almost balmy evening-at least in the forecourt, courtesy a plethora of mist fans.

Among the film stars were Anupam Kher (although he was also the plus-one of his wife, Chandigarh MP Kirron Kher), Kangana Ranaut, Sushant Singh Rajput, and Rajnikanth. Director Karan Johar and producer Boney Kapoor were also present.

Government offices and the Parliament building in the vicinity of Rashtrapati Bhavan were cleared by 2 PM. As BJP and NDA leaders walked onto the forecourt, the aware audience was keen watching who would head for the stage, where chairs were placed for the ministers to sit on, and who would stay in the audience.

It became clear then that she wasn’t in the cabinet.

Although not too many opposition leaders were present at the event, United Progressive Alliance chairperson Sonia Gandhi and Congress president Rahul Gandhi came together and sat in the first row. As did former prime Minister Manmohan Singh. BJP leader Uma Bharti could be seen briefly chatting with a smiling Sonia Gandhi.

Amit Shah came early but took more than half-an-hour to take his seat. He walked slowly to greet dignitaries while people, too, rushed to meet him. The Prime Minister arrived minutes before the programme in his black limousine and amid thunderous applause, walked to his designated seat, bowed to greet all the visitors and took the seat next to Rajnath Singh.

The ceremony ended with a group photo.

But the journey of the new government of India, riding high on the expectations of the people in a difficult time, has just started.