‘The Kings’ from Nalasopara rule ‘World of Dance’ 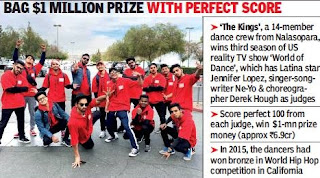 Latina star Jennifer Lopez thought they wouldn’t be able to surprise her. “But you surprised me!” she exclaimed. Singer-songwriter Ne-Yo called their performance the “greatest action movie ever watched”, while Emmy Award winning choreographer Derek Hough thought they “altered reality”, before they crowned a bunch of street dancers from the far suburbs of Nalasopara ‘World Champion’ on the American reality television show ‘World of Dance’.

‘The Kings’, a 14-member dance crew made up of boys in their 20s, won the grand finale of the show’s third season telecast on NBC and judged by Lopez, Ne-Yo and Hough on Sunday night (US time). The Nalasopara boys took home a prize money of $1million (nearly Rs.6.9 crore).

The winners took the stage clad as warriors on a battle field, armed with swords and shields with notes and rhythms from southern India to guide their flips and stunts in slow motion that ultimately won them scores of ‘100’ by each of the judges. Choreographer Suresh Mukund, whose life inspired the Bollywood film ‘ABCD 2—Anybody Can Dance’ directed by Remo D’Souza, said with this victory they wouldn’t need to look at participating in other competitions as they have now achieved the ‘World’s Best Dance Group’ title.

It took 12 weeks of intense dance-offs and breath-taking moves for ‘The Kings’ to live up to their name in the finals, where they competed with Canadian contemporary dancer Briar Nolet, the sister duo of Ellie and Ava, VPeepz, a hip-hop group from the Philippines, and Unity LA, a 10-person squad from Southern California, that ended up as the runner-up.

The dancers have been persistent in their efforts and had their eye on the trophy after they brought home a bronze medal in 2015, when they ranked third in World Hip Hop competition in California.

Mukund and his partner Vernon Monteiro had met at dance shows in Mumbai and knew that their coming together could create history. They then started Fictitious Dance Group in 2009.

“An amazing feeling,” is how Akshay Warwadekar, a member of ‘The Kings’, summed up their win. “We have walked 10 km to reach the dance class, gone looking for grass to practise our stunts because we had no mats, and spent hours practising in the heat. The journey has been one of struggle, but this win is the end of our struggle,” said Akshay, whose family moved from a chawl to a flat after the success of his dance career. Calling the win a result of their patience and goal, Pratik Gojare, another member, said: “Our efforts have finally paid off.”