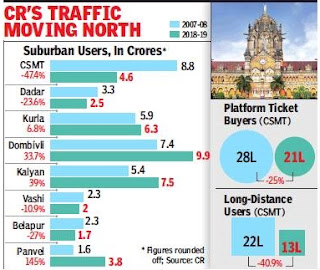 The number of people using the Chhatrapati Shivaji Maharaj Terminus, including suburban and long-distance train passengers and platform ticket buyers, has almost halved in the past 11 years, show Central Railway statistics. It has dropped from 9.3 crore users in 2007-08 to almost 5 crore in 2018-19, a slide of over 46%.

The number has been dropping every year, with population moving north, offices shifting to newer hubs in the north and west, and other stations on the CR network turning into terminuses and taking the load off the Unesco World Heritage site station.

The falling number also belies the BMC claim that its Himalaya foot overbridge from CSMT across D N Road collapsed recently because of the additional load put on it as more people began using it once CR extended its FOB inside the station to serve all its 18 platforms in 2014. Six persons were killed in the collapse in March.

The number of suburban passengers starting a journey from CSMT has fallen by almost 48% to 4.6 crore in 2018 -19 from 8.8 crore in 2007-08. In the same period, the number of long-distance train passengers with reserved and unreserved tickets has also dropped almost 41% to 13 lakh from 22 lakh.

The reason for the sharp drop in CSMT’s commuter use is not hard to find. As real estate expert Prasad Sathyen said, “Many people now do not want to spend time travelling to work (in hubs like Fort or Nariman Point). They would rather take up employment in areas like Andheri and BKC. Also, affordable housing in satellite townships means people do not want to stay in smaller houses in south Mumbai.”