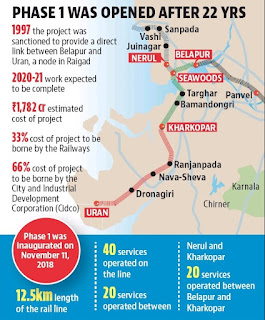 Work on phase two of the proposed Nerul-Seawoods-Uran suburban railway line will begin after the monsoon. CR invited tenders for construction of six bridges, one road overbridge (RoB) at Gavan railway station, and one road underbridge (RuB).

Majority of the work in this phase will be carried out on the stretch between Bamandongri and Gavan railway stations. After the construction of the bridges, railway tracks will be laid across 11 km.

“Tenders have been invited and we are planning to start the on-ground work post monsoon. After the construction of the RoB near Gavan railway station, it would be easier to commence with the laying of the railway tracks in the second phase,” said a senior CR official.

Work on phase 2 is expected to be complete within one year and three months.

Other stations that will be part of phase 2 include Ranjanpada, Nhava Sheva, Dronagiri and Uran railway stations.

The railway corridor was first proposed in 1997, but phase 1 – between Belapur and Kharkopar – became operational only in November last year.

The CR runs 40 services on the line daily – 20 between Kharkopar and Nerul, and Belapur and Kharkopar railway stations.