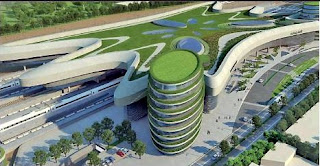 A butterfly-shaped rail terminal at Byappanahalli will offer airport-like facilities to passengers in a few years.

The Indian Railway Stations Development Corporation along with BBMP unveiled the blueprint of the Byappanahalli station development project. Of the 132 acres where the project is envisaged, 30 acres will be given to private builders on lease for 99 years and with the potential to accommodate 26 lakh sqft built-up area.

IRSDC officials said the world-class station, to be built at an estimated Rs.250 crore, is expected to be completed in three years, while the commercial establishments will be ready in eight to 10 years.

The station, officials say, will be a green building and is expected to see nine lakh passengers a day in 20 years. Ashwani Kumar, general manager (works) of IRSDC, said: “We will facilitate a waiting area similar to airports in the station concourse. We will segregate passengers into arrival and departure halls and allow them to board 15 minutes before departure to reduce crowding on platforms.”

The main station building, shaped in the form of a butterfly, will have roof gardens with integrated courtyards aimed at promoting the concept of Garden City. The green building is expected to ensure safe and secure passenger movement, cleanliness and hygiene and ease of access to stations.

Sources said several real estate firms are keen to bid for commercial properties inside the station area and within the complex to establish hotels, hospitals, workplaces and service apartments. The last date for request for proposal for the project is May 30.

A proposal to develop Byappanahalli station into a world-class facility figured in the railway budgets of 2009-10 and 2013-14. In July 2016, Indian Railways decided to develop 400 stations across the country as world-class ones under the public-private partnership model.