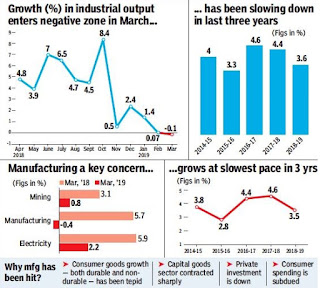 India’s industrial output declined by 0.1% in March, hitting a 21-month low, due to contraction in manufacturing, capital goods and consumer durables. Manufacturing, which constitutes 77.63% of the Index of Industrial Production, shrank 0.4% in the month.The previous low for IIP was a 0.3% decline in June 2017.

On a quarterly basis, this was one of the lowest average growth figures at 0.46% since the government revised the base year of the index to 2011-12 from 2004-05. Average growth in the July-September quarter of FY13 was 0.1%.

Electricity generation slowed to 2.2% in March from 5.9% in the year earlier and mining to 0.8% from 3.1%. Passenger vehicle sales declined 17% in April, underscoring the slump in demand and putting revival measures at the top of the next government’s immediate agenda.