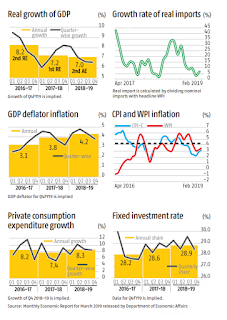 India’s economy appears to have slowed down slightly in 2018-19, a finance ministry report has said, listing some challenges that need to be addressed to get the momentum going.

The latest comments about growth come in the midst of general elections and are expected to trigger a debate about the health of the economy under PM Modi. The NDA government has showcased high economic growth to highlight its governance record.

The monthly economic report has listed the factors behind the slowdown. It is a widely acknowledged fact that growth momentum in the fourth quarter of 2018-19 had slowed down due to a string of reasons.

The report comes against the backdrop of data pointing to slowdown in some sectors such as automobiles and overall manufacturing. GDP growth in the October-December quarter of 2018-19 slowed to 6.6%, while the Central Statistics Office (CSO) has estimated growth for 2018-19 at 7%, marginally down from the previous estimate of 7.2%. The RBI, in its monetary policy statement, said more recent high frequency indicators point to manufacturing growth slowing down while investment demand remains muted. The central bank has cut rates twice to support growth in the face of slowing inflation.

However, India remains the fastest growing major economy in the world and most multilateral agencies see growth picking up in the months ahead on the back of reform measures undertaken by the government. The new government which assumes office later this month is also expected to unveil steps to boost growth.