Skymet: Monsoon might hit Kerala late, will be below normal 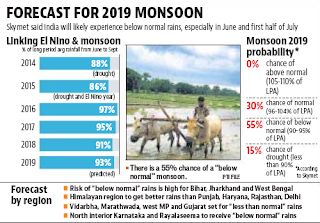 Monsoon is likely to arrive in Kerala on June 4, three days after its normal onset date, marking the official commencement of the rainy season in the country, private weather forecaster Skymet said.

The normal onset date for monsoon over Kerala is June 1. Skymet said monsoon will be ‘below normal’ in the country with a Long Period Average of 93 per cent and an error margin of five per cent.

“Arrival of monsoon over Andaman and Nicobar Islands will be on May 22, with an error margin of plus/ minus two days. Southwest Monsoon 2019 is likely to make onset over Kerala on June 4, with an error margin of plus/minus two days. “It seems that initial advancement of monsoon over peninsular India is going to be slow,” Skymet CEO Jatin Singh said.

“All the four regions are going to witness lesser than normal rainfall, this season. Rainfall in East and Northeast India and central parts will be poorer than Northwest India and South Peninsula,” Singh said.

According to Skymet, there are 55 per cent chances of a below normal rainfall, which will have an influence of El Nino, a phenomenon linked to the heating of Pacific waters.

East and Northeast India will get 92 per cent of the LPA which falls under the below normal category.

Risk remains high for Bihar, Jharkhand and West Bengal, while it will be marginal for Northeast India, Skymet said.

Northwest India that comprises all north Indian states will receive 96 per cent rainfall of the LPA, which falls on the border line of normal and below normal rainfall category.

Hilly states of Jammu and Kashmir, Himachal Pradesh and Uttarakhand are likely to perform better than the plains of Punjab, Haryana, Rajasthan and Delhi-NCR, the Skymet said.

Central India is likely to receive rainfall of 91 per cent of the LPA. Rainfall in Vidarbha, Marathwada, west Madhya Pradesh and Gujarat will be “poorer than normal”.

This is likely to aggravate the situation as Marathwada and several parts of Gujarat been facing farm distress and drought like situation. Conditions will be more or less similar in South peninsula.