World’s biggest election is now over 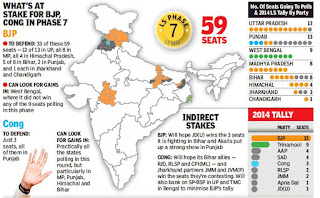 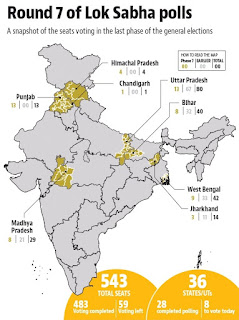 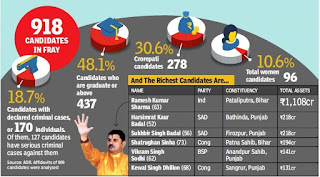 Voting for the sevenphase Lok Sabha elections concluded on Sunday, more than a month after it began on April 11, with over 67% voters exercising their franchise for 542 parliamentary seats (voting for Vellore constituency was rescinded due to the rampant use of money power) spread across the country. Counting of votes will be taken up on Thursday.

Turnout for most of the other states were similar to 2014, with voters in West Bengal and Assam turning up in higher numbers as before and Uttar Pradesh and Bihar staying close to their 2014 mark.

Most significantly, the gap between male and female turnout has decreased in these elections compared to 2014, the Election Commission officials have said.

The final phase of the general elections on Sunday witnessed a turnout of over 64% as of 10 pm. The final figure is expected to be higher. Uttar Pradesh, Bihar, Madhya Pradesh, Jharkhand, West Bengal and Punjab voted in the last phase.

Incidentally, instances of paid news came down in 2019 — 640 cases (2019) and 1,297 (2014). Over 900 social media posts were taken down from platforms such as Facebook, WhatsApp, Twitter, ShareChat and Google on the grounds of model code violations.

Violent clashes in West Bengal and Punjab marred the seventh and final phase of voting on Sunday in the marathon 17th Lok Sabha elections. Estimates at the end of polling indicated that around 61% of the 101 million people eligible to vote in the last leg turned out to choose their representatives to 59 seats spread across seven states and the Union territory of Chandigarh, the Election Commission said, adding that the turnout figure would be updated later.

Sunday’s polling, which decided the electoral fortunes of 918 candidates including Prime Minister Narendra Modi in Varanasi, was marked by glitches in electronic voting machines that had been a feature of every phase of polling in the world’s largest democratic exercise.

More than 8,000 candidates were in the fray for 542 Lok Sabha seats that were decided in the seven rounds of voting. Election to the Vellore seat in Tamil Nadu was cancelled after the recovery of a vast amount of cash from a building allegedly linked to a Dravida Munnetra Kazhagam leader.

Counting of votes from the election, following a hard-fought campaign by both Prime Minister Modi and his chief challenger Congress, will be taken up and the results declared on May 23. Voting took place on Sunday in all 13 Lok Sabha constituencies in Punjab and an equal number in Uttar Pradesh, nine in West Bengal, eight each in Bihar and Madhya Pradesh, four in Himachal Pradesh, three in Jharkhand, and the lone Chandigarh seat.

Violent clashes erupted during the final phase of the elections in West Bengal -- which recorded a turnout of 73.4% -- despite the deployment of 710 companies of security personnel in the state that elects 42 lawmakers to the Lok Sabha, the most by a state after Uttar Pradesh (80) and Maharashtra (48).

Despite the Election Commission deploying 710 companies of security personnel in the state, reports of clashes poured in from all nine parliamentary and four assembly constituencies that voted.

The poll campaign had to be cut short by a day in West Bengal after BJP and TMC supporters fought a pitched battle in Kolkata on Tuesday at a roadshow by BJP president Amit Shah. Vandals stormed a college and damaged a bust of Bengal Renaissance icon and social reformer Ishwar Chandra Vidyasagar.

The stakes are high for both parties, with the BJP looking to West Bengal to offset possible reverses in its northern and western strongholds and TMC nursing ambitions of playing a role on the national political stage.

Punjab recorded a polling percentage of 59% in its 13 Lok Sabha constituencies. In the lone Chandigarh seat, 63.57% of the electorate turned out to vote .

Clashes broke out between Congress and Akali-BJP workers in Talwandi Sabo in Bathinda and Gurdaspur. At Talwandi Sabo, the Akalis alleged that gun shots were fired by ruling Congress workers.

In Uttar Pradesh, the country’s most populous state, the turnout was 55.52%. In Varanasi, the Prime Minister’s constituency, the turnout was 53.38%. Gorakhpur, a seat previously held by chief minister Yogi Adityanath and which the BJP lost in a by-poll last year, recorded a voter turnout of 56.47%.

Violence erupted in the Chandauli Lok Sabha constituency, where state BJP chief Mahendra Nath Pandey is seeking re-election, when supporters of the saffron party and the Samajwadi Party clashed.

An average of 66.88% voters exercised their franchise in the last six phases. 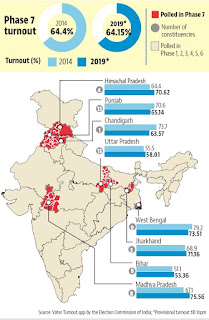 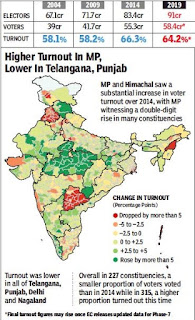