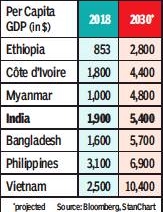 The 2020s are set to be the Asian decade, with the continent dominating an exclusive list of economies expected to sustain growth rates of around 7%.

India, Bangladesh, Vietnam, Myanmar and the Philippines should all meet that benchmark, according to a research note on Sunday from Madhur Jha, Standard Chartered’s India-based head of thematic research, and global chief economist David Mann. Ethiopia and Côte d’Ivoire are also likely to reach the 7% growth pace, which typically means a doubling of GDP every 10 years. That’ll be a boon to per capita incomes, with Vietnam’s soaring to $10,400 in 2030 from about $2,500 last year, they estimate.

The South Asian members of the group should be GDP standouts as they’ll together account for about one-fifth of the world’s population by 2030, Standard Chartered reckons. The demographic dividend will be a boon for India, while Bangladesh’s investments in health and education should juice productivity.

The Asian dominance of the list is a change from 2010, when the bank first started tracking the economies it expected to grow by around 7%. Back then, there were 10 members evenly split between Asia and Africa.

China is a notable absence from the latest ranking — reflecting both a slowdown in economic growth and a progression toward higher per capita incomes that makes faster growth rates more difficult to sustain.