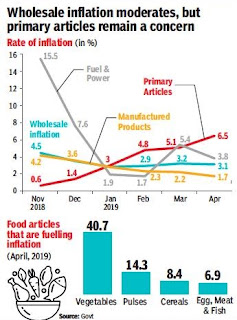 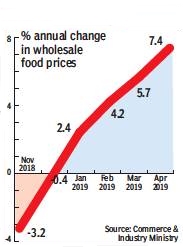 Inflation measured by the wholesale price index moderated in April but food inflation soared to a 33-month high of 7.4% led by a surge in prices of vegetables, cereals, wheat and pulses.

The annual rate of inflation, based on the monthly WPI, was 3.1% in April compared with 3.2% for the previous month and 3.6% during the corresponding month of the previous year.

Economists said the sharp spike in food inflation was not alarming but the trajectory of the southwest monsoon rains would be crucial for the final outcome on food prices.

Economists said that food prices have seen a sustained increase in the previous four months after registering a contraction each month from July to December 2018.

Both wholesale and retail inflation are below the Reserve Bank of India’s comfort level and there is an expectation that the central bank will cut interest rates to revive growth when it reviews monetary policy in June. The central bank relies more on the retail inflation data while taking view on rates but it does take into consideration all data linked to prices.

Some other economists said there could be a spillover of the impact of rising wholesale food prices to the retail level and needs a careful watch.