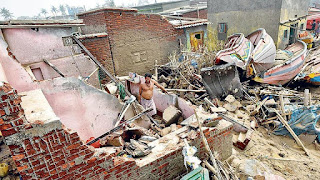 A massive relief and restoration effort went underway in Odisha, a day after cyclone Fani killed at least 16 people and left a trail of devastation in the coastal state, snapping power and electricity supplies, and telecommunication links.

The authorities were trying to assess the extent of the damage done by the cyclone, which was accompanied by winds gusting up to 205 kilometres per hour that uprooted trees, toppled power pylons, and disrupted road, rail and air traffic. Lack of access to remote areas and disruption of telecommunications was proving to be a hindrance in the rescue and relief effort.

“This is a rarest of rare summer cyclone, the first such to hit Odisha in 43 years,” chief minister Naveen Patnaik said in his first remarks after the storm, whose name means hood of the snake. Thousands of emergency workers, people from civil society organisations and personnel of national and local disaster response teams were engaged in relief operations.

Eight people were killed in the storm on Friday and the death toll increased to 16 on Saturday, and the authorities said the number could go up. That the number of fatalities was so low was seen as a testament to the disaster management skills developed over the years by Odisha, where in 1999, between 9,000 and 10,000 people perished in a “super cyclone.”

Patnaik said a record 1.2 million people were evacuated within 24 hours from Ganjam, Puri and other vulnerable areas. “Almost 7,000 kitchens catering to 9,000 shelters were made functional overnight. This mammoth exercise involved more than 45,000 volunteers,” he said.

On Saturday, Fani crossed over into West Bengal and moved northeast toward Bangladesh, weakening from a “severe cyclonic storm” to a “cyclonic storm”. At least a dozen people were confirmed killed in Bangladesh.

Rain lashed Kolkata and trees and electricity poles were uprooted in coastal towns such as Digha, Mandarmani and Tajpura. West Bengal chief minister Mamata Banerjee, however, said the cyclone did not cause much damage in the state.

Prime Minister Narendra Modi spoke to Patnaik and discussed the situation in the aftermath of Fani’s landfall. “The entire nation stands in solidarity with all those affected by the cyclone in different parts… Day after tomorrow, on the 6th morning, I will be going to Odisha to take stock of the situation arising in the wake of Cyclone Fani,” he tweeted.

The districts of Puri and Khurda were the worst affected, Patnaik said, adding that Cuttack, Bhadrak, Kendrapara, Jagatsinghpur, Balasore, Mayurbhanj, Keonjhar, Dhenkanal and Nayagarh were also hit by the cyclone.

“In Puri and parts of Khurda, where the electricity infrastructure has totally been devastated, we have the challenge of having to set up the entire electrification afresh,” he added.

Engineers and technicians were working to restore services after electricity poles and mobile towers were uprooted in several coastal areas. Thousands of trees were blocking the streets in vast swathes of the state.

Railway officials said train services will run normally from Bhubaneswar from Sunday, though they will be available only for those trains that originate from the state capital. The services were kept on hold as the rail lines were damaged by the cyclone.

“Till now, we are unable to reach disconnected blocks such as Krushnsprasad, Bramhagiri and Astaranga. Though we have managed to somehow clear the national highway connecting Bhubaneswar and the roads in the town, many interior roads are still inaccessible. We have pressed National Disaster Response Force and Odisha Disaster Rapid Action Force teams for the job,” said Puri district collector Jyoti Prakash Das.

People in the town struggled with heat and lack of drinking water. “I have lost my home to the cyclone. There’s nothing to eat and not a drop of water to drink. I am forced to buy bottled water. How do I feed my five kids?” said Pushpalata Patra, a resident.

Santosh Das, public relations officer of the state disaster management department, said the “plan for rebuilding grounded houses will be made after assessing the extent of the damage”.

“Whether the government will seek help in building [houses] will be decided after completing an assessment of the nature and extent of damage,” Dash said.

“I don’t know when the officials will restore power. It will take at least three months to bring my hotel back in shape,” said Laxmidhar Sahu, who owns a hotel in Puri. 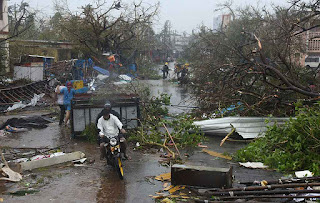 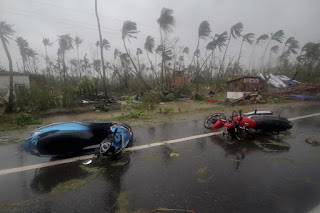 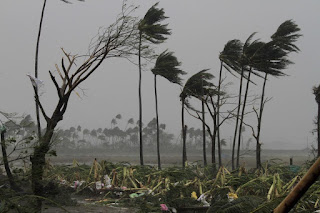 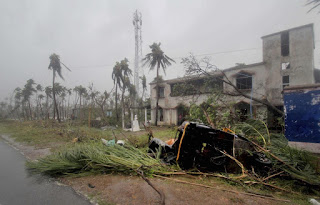 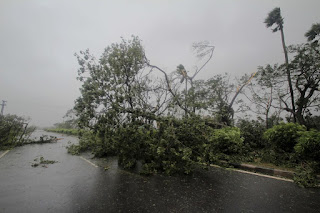