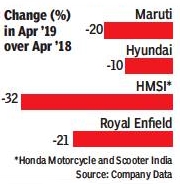 The new fiscal did not ease pressure on the strained auto industry as top players such as Maruti Suzuki and Hyundai in passenger vehicle segment and Honda and Royal Enfield in two-wheeler industry reported double-digit declines in numbers.

Sales have been falling over the past few months as nervous buyers have stayed away from new purchases on uncertainty related to elections and growing distress in rural areas.

Maruti’s sales fell by 20% in April as the company sold around 1.3 lakh units in April against 1.6 lakh units in the same month last year. Chairman R C Bhargava has said that growth will be difficult to come by anytime soon as buyer confidence remains weak.

Hyundai, which is slated to launch a new mini SUV Venue, saw numbers go down by 10%. Sales head Vikas Jain has said that a turnaround may take some more time as uncertainty related to polls is at its peak now.

The steepest fall of 32% was seen by Honda Motorcycle and Scooters India, the country’s second-largest two-wheeler maker, which sold 4.3 lakh units against 6.3 lakh in April last year.