Tata puts all its food biz on a single platter 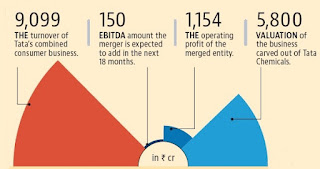 Tata Global Beverages Ltd is acquiring all the branded food businesses from Tata Chemicals Ltd in an all-stock transaction that is aimed at creating a consumer business company with revenues of ₹9,099 crore.

The carving out of the food business of Tata Chemicals is part of Tata Sons Ltd chairman N. Chandrasekaran’s strategy to simplify group structures with a sharper business focus. With at least 100 companies in its fold, the $103 billion Tata group has business interests ranging from automobiles to steel and software.

The transaction is subject to shareholder and regulatory approvals. EY and JPMorgan advised Tata Chemicals on this deal. Bank of America Merrill Lynch advised Tata Global.

The new business created by the merger of the consumer businesses will be known as Tata Consumer Products Ltd. “Tata Consumer Products consolidates our current presence in food and beverages in the fast-growing consumer sector. Through this combination, we have created a strong growth platform to meet the growing aspirations of Indian consumers,” Chandrasekaran said in a statement.

According to R. Mukundan, managing director of Tata Chemicals, the combined entity will have access to 200 million households over about 5 million retail points, making it one of the largest consumer footprints in the country.

The consumer business of Tata Chemicals consists of Tata Salt, an iconic brand, with about 60% market share.

Synergies are expected to arise from the merger, both in terms of revenue and cost, as distribution and media buying would be more efficient, said the management of the Tata group in a telephonic press conference after the announcement of the merger.

The group expects a pretax synergy of 2-3% of combined

India branded business revenue, which will be realized over the next 12-18 months. India branded revenue between the two businesses is 60% of the combined revenue, which is over ₹9,000 crore. This means that synergies worth ₹100-150crore are expected to be added to the combined entity’s Ebitda in the next 12-18 months. Ebitda stands for earnings before interest, tax, depreciation and amortization.

The restructuring underlines Tata group’s growing focus on consumer businesses. While the combined entity will be a leader across multiple categories such as tea and coffee, overall, the Tata group remains a much smaller entity than Hindustan Unilever Ltd, which clocked a profit of ₹6,060 crore in FY19.