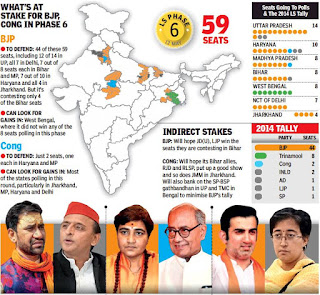 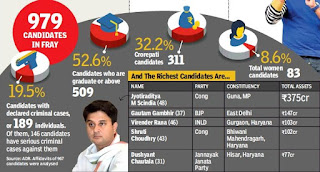 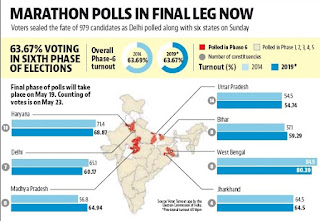 The penultimate phase of 2019 Lok Sabha election wound up on Sunday with voting for 59 seats across seven states that saw a turnout of a little over 63%, which is expected to touch the 65% mark of 2014 in the final count.

Violence, however, continued to mar elections in West Bengal where a BJP worker was reported killed in poll-related violence in Jhargram. The state again recorded the highest turnout at nearly 80% as of 6 pm.

Bihar and Madhya Pradesh saw an increase of close to 2 percentage points over the 2014 turnout. Delhi, however, saw a slight decline till reports last came in.

In phase six, 14 parliamentary constituencies went to polls in Uttar Pradesh, all 10 in Haryana, eight each in Bihar and West Bengal, four in Jharkhand and seven in Delhi.

The results in Haryana and Delhi are being watched closely for the political implications they may hold for the upcoming assembly elections scheduled to be held in these states over the next few months.

In 2014, BJP won all seven seats in Delhi but lost the assembly elections six months later. In Haryana, however, the party doubled its vote share to 34.7% in the assembly polls and registered a convincing win.

Most of the 59 constituencies that went to polls on Sunday were won by the BJP in 2014. But there are many tough contests in 2019.

One of the most watched contests in this phase was in the BJP stronghold of Bhopal, where Congress veteran Digvijaya Singh took on Pragya Singh Thakur of the BJP. Jyotiraditya Scindia’s constituency Guna — one of the only two seats the Congress had won in MP in 2014 — also went to polls on Sunday.

Voting was also held at Azamgarh in Uttar Pradesh, from where former chief minister and Samajwadi Party leader Akhilesh Yadav contested, and Sultanpur, where BJP’s Maneka Gandhi is pitted against Congress’ Sanjay Singh.

Another veteran in the fray is Congress’ Sheila Dikshit, the three-time Delhi chief minister, who is taking on BJP’s Manoj Tiwari in North-East Delhi. The other big fight was between AAP’s Atishi Marlena and cricketer Gautam Gambhir (of BJP) in East Delhi.

Voting in West Bengal was conducted amid unprecedented security and incidents of clashes between workers of the ruling Trinamool Congress and the BJP.