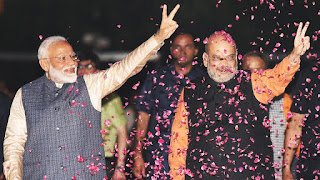 The massive mandate for the BJP-led NDA is a vindication of work done for national security and development, and an honest administration that worked for the welfare of all sections of society, Prime Minister Narendra Modi has said.

In the next term, the government will work to fulfil promises for a New India by 2022 and take all along with humility, he emphasised.

“In the coming years, I will not do anything with a bad intent (badniyat ya badiraade se). Mistakes may happen while working, but no action will be done with a bad intention,” Modi said, addressing party workers at the BJP headquarters here.

Maintaining that he is a “fakir” (ascetic) who has been blessed with such a mandate, Modi promised to complete welfare projects, such as toilets, affordable housing and healthcare for all.

“This is not Modi’s victory, but a victory of those who stand for honesty, for toilets for the poor, for affordable healthcare to the sick, for farmers… This was a government that, though not having a Left tag, worked for the unorganised sector. The vote is for giving pucca houses to the poor,” he said, adding people were sure that the funds were going to the right beneficiaries.

The BJP had gone to the people with a mandate for New India, the Prime Minister pointed out.

Drawing an analogy from the Mahabharata, he said, “In Mahabharata, Sri Krishna was asked on which side he was. He said he was not on any side, but (on the side of) those working for the good of Hastinapur. In this election, people stood for Bharat.”

He also set 2022 — when India completes 75 years since Independence — as the deadline to complete several of his government’s welfare projects.

Underlining the need to maintain peace and decorum in the wake of such a grand victory, Modi asked party cadre to stay humble and dignified. “BJP’s speciality is that when it was reduced to just two seats (in 1984), it did not deviate from its ideals and principles or lose hope, and today when it has won a consecutive term we will not lose our dignity and humility.” Every BJP worker has worked for Bharat Mata’s triumph, he said.

Modi also took a dig at those raising the bogey of secularism to oppose the BJP.

“Some people used to hide behind the printout or tag of secularism. You must have seen, from 2014 to 2019 they stopped raising this issue. No political party could wear the veil of secularism and mislead the people,” he said.

While the 2014 mandate came at a time when people did not know him that well, the one in 2019 has come after they had become familiar with him and his work, the Prime Minister said.