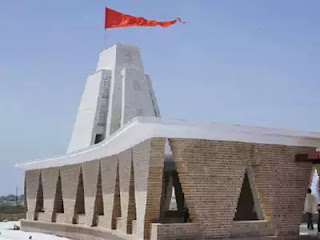 On a parched plot of land in Gujarat’s Kutch that was a part of the erstwhile Sindh province and at the very spot on the banks of Kori where the river Sindhu is believed to have once ended its journey, Sindhis have got their own sacred spot, their holy of holies, the Jhulelal Tirthdham. Described as “a centre for global Sindhi identity,” the Tirthdham, which is coming up on 33 acres of arid land in Kutch’s Lakhpat district, saw the inauguration of its first phase as the newly built Jhulelal temple  was opened.

Groups of devotees visited the temple on the Hindu Sindhi new year day in April.

With the presiding deity, Jhulelal, watching benignly from a fish-shaped pedestal made of pristine white marble (legend has it that Jhulelal came out of the sea, riding a fish to save the Sindhis from a merciless medieval king), groups of devotees visited the temple on the Hindu Sindhi new year day in April.

Standing in supplication and amid chants of mantras by priests, they prayed and partook of prasad, the “mitha pulao”, a sweet dish made of rice and sugar, before dispersing.

A few minutes’ walk from the shrine, on the open courtyard of the state guesthouse, devotees assembled to hear soulful Sindhi bhajans sung by local musicians. Many elderly men and women, after a sumptuous lunch of authentic Sindhi cuisine, danced joyously as devotional songs and music filled the air.

The plan for this one-of-a-kind pilgrimage place is grandiose. Placed between two Hindu holy sites, Koteshwar and Narayan Sarovar, the Tirthdham is meant to be, for the Sindhis, their own Mecca, Kashi, Shirdi, Akal Takht and Vatican. “The complex will reflect everything that Sindhis and their culture stand for. In addition to the temple, the complex will have a massive Jhulelal statue, a convention hall, an auditorium, a museum-cum-library, a guesthouse and much more,” says a visibly exhilarated historian and former Mumbai college principal Subhadra Anand.

Much before wealthy Sindhis like the Mumbai-based diamantaire Dilip Lakhi and realtor magnet Harish Fabiani flew down to Bhuj, the nearest airport, before driving down nearly 200 km to the Tirthdham on Cheti Chand, it was Anand who talked of building such a centre at a seminar years ago at Adipur, a town which is home to thousands of Sindhis who migrated in 1947. “It is now the collective dream of the Sindhi community. It will be a site of which our present and future generations will be proud of,” says Lakhi, seated at his plush office in Mumbai’s upscale Bandra Kurla Complex. Fabiani, who too has donated for the project, calls it a “dream close to my heart”.

Madhav Joshi, 92, frail and chair-bound, who had attended Anand’s Adipur lecture, is among the early dreamers of the project, one of a bunch of committed Sindhis concerned about protecting, preserving and promoting their culture and identity.

A migrant himself, Joshi lives at Narayan Sarovar in Kutch, knows the area’s topography and speaks fluent Sindhi. “Madhav Joshi gave us a guided tour of this area and suggested the pilgrimage site could come up here because it was once a part of the Sindh province, and the Sindhu river ended here before the devastating earthquake of 1819 blocked it. It has a Sindh connection and is close to the sea,” says Lakhmi Khilani, a retired founder-director of the Indian Institute of Sindhology in Adipur.

Once they had identified the land, the group in 2010 approached then Gujarat CM Narendra Modi, who at the very first meeting enthusiastically welcomed the idea, saying: “Your dream is my dream.” To humour Anand, he would address her as “Jhulelal Madam.” “The government has allotted us 73 acres of land, out of which we have bought 33 acres so far. The rest will be bought as more constructions come up,” states young entrepreneur Parikshit Advani, who has invested time, money and energy into the project.

Bhavna Rajpal, a young filmmaker who shuttles between Mumbai and London, is also investing her time and skill to spread Sindhi culture by curating Sindhi film festivals globally. “Our generation didn’t suffer the pain of losing a state on the eve of Partition, but we share the concern that our rich cultural and linguistic ethos should be protected. This centre will help protect our heritage,” says Rajpal who captured the historic opening ceremony of Jhulelal Tirthdham on camera and video for posterity.