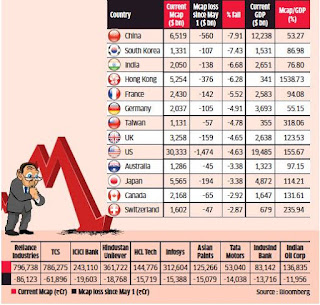 India’s stock market has been one of the top losers among major emerging markets so far in May amid renewed concerns over the US-China trade war. Traders used the opportunity to cut bets ahead of the general election results, resulting in India losing 6.7% or $138 billion in market capitalisation. Brokers said the so-called hot money, which had started flowing into the country since early March, is being pulled out. India’s most valuable company Reliance Industries, which has been among the best performer on the bourses in the last year or so, has been the biggest loser, shedding ₹86,123 crore in market value since May 1. Tata Consultancy Services —the main competitor against RIL for the numero uno position in m-cap — too has lost ₹61,896 crore since May 1.