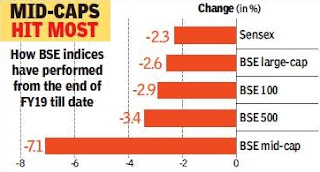 The sensex slid for the sixth session on the trot as US-China trade tensions escalated and domestic traders started feeling jittery about the poll results. Led by index heavyweight Reliance, the sensex closed 488 points lower at 37,789 — its first sub-38k closing in over six weeks. Since its April 26 close at 39,067, the index is now down 3.3%, or 1,278 points in the red.

These losses have also left investors poorer by Rs.5.3 lakh crore with the BSE’s market capitalisation now just a tad lower than Rs.147 lakh crore. Globally, traders are concerned that the US decision to hike tariffs on Chinese goods worth $200 billion to 25% from the current level of 10% will hurt the world’s second-largest economy.

Following a tweet from the US President Donald Trump, the US government on Wednesday evening announced its decision formally and also published the list of goods on which tariffs will be hiked. Additionally, investors around the world were jittery after latest trade data from China showed an overall trade surplus at $13.8 billion, substantially lower than the $33-35 billion that economists were estimating. As a result, the Shanghai Composite lost 1.1%, while Hang Seng in Hong Kong closed 1.2% lower.

The strong selling by foreign funds also led to a weakness in the Indian rupee, which closed at 69.71 to the dollar, 28 paise down from the previous close. Global trade fears also impacted the strength of the rupee, market players said.